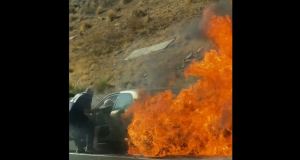 According to the fire department, the vehicle was on fire on the side of Interstate 8, east of Lake Jennings, which is located near the community of Lakeview.

With flames engulfing the car, cell phone video showed two Good Samaritans run in and drag the driver and passenger out of the burning vehicle. Several other bystanders then rush over and help to carry them away from the car.

The two occupants and a bystander were transported to a hospital with burn injuries, the fire department said. Their conditions were unknown.

The fire spread to nearby vegetation, but responding firefighters quickly contained it, LFPD reported.

The cause of the blaze was unclear.