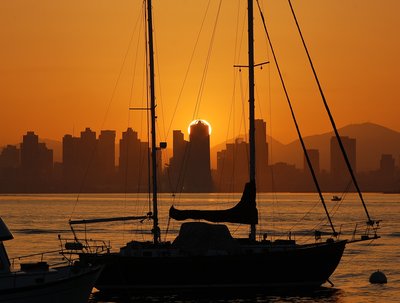 The coronavirus continues to pummel San Diego’s residents and its economy. As vaccines slowly move through the County, how much scarring will remain? How fast will confidence and spending resume? How quickly will businesses respond by hiring back former or new workers?

Economic toll of 2020: San Diego’s economy ended 2020 on a somber note. After a few months of improvement, companies cut payrolls again in December and the jobless rate jumped. For the year as a whole, the region lost more than 100,000 jobs. This widely surpassed the 60,000 jobs lost during 2009 at the height of the last recession. The unemployment rate stands at 8.0% compared with close to 3.0% just a year ago.

Many businesses have struggled to survive. Typically, 20% of new businesses fail in their first year and 50% in their fifth year of operation. The strains from “stop-start” operations as infection rates waxed and waned probably accelerated these failure rates considerably. For new businesses just starting in 2019, some 40% of them could have failed in 2020 as they ran out of cash. Even established firms closed as owners decided that it was finally time to shut down and retire.

Bright spots: Even as firms have failed, new ones are being formed. In California, 2020 saw new business applications up by 42% at year-end. The region’s economy is slowly clawing its way back. As of year-end, four major sectors had reached employment levels equal or greater than their pre-pandemic totals: construction, business and professional services, retailing (boosted by e-commerce), and utilities.

Housing is booming, spurred by low mortgage rates and people wanting more space. Home prices ended the year up 12% relative to a year ago. Stocks soared in 2020, with the S&P 500 Index ending the year up 16%. Congress passed more COVID relief in December, raising unemployment benefits and sending out $600 checks to most adults. Mayor Todd Gloria has announced the receipt of $42 million of federal funding for the purpose of rent relief.

What to expect in 2021: Bouts of optimism and pessimism will define the next several months as San Diegans struggle to emerge from the pandemic‘s scourge. Following are questions and answers to some of the key issues facing us.

How much further sufferreing? Vaccination rates need to be accelerated well beyond one million per day or it will take until mid-22 before “herd immunity” can be restored. In the meantime, new vaccine-resistant mutations of the virus could appear. Without a major pickup in San Diego’s vaccine rollouts, the economy will remain substantially shuttered. The first quarter could see further job losses and the second quarter looks like it will at least begin with considerable weakness.

Affects of new administration: President Biden wants to provide urgent additional stimulus, proposing an additional spending total of $1.9 trillion. While Congress may not approve full funding, it may pass more than half of the total. Another $1,400 of direct individual payments, more help for the unemployed, and some additional assistance for state and local governments are likely to be included. While some of this money will go into savings accounts, the amount spent will help backstop parts of the region’s economy that are still operating.

Service sector reopening? Economic lockdowns have slashed more than one-quarter of payrolls in San Diego’s leisure and hospitality industry. The toll has been severe when you realize that the industry employs nearly one of every seven of the region’s workers. While restaurants recently saw operating rules relaxed, a broad reopening of the entertainment industry is likely to wait until the second half of 2021 or when approximately 75% of the population has been vaccinated.

How will consumers respond? After more than a year spent primarily in home-confinement, consumers will be eager to return to their pre-pandemic lives. They may retain some of their new habits by working only part-time at the office and continuing their streaming subscriptions. Many may have to start paying for student loans, rent, or mortgages where various forbearance programs have been in effect. The release of pent-up demand will dominate, however, as consumers flock to restaurants, entertainment venues, and even shopping malls. Confidence over a return to “normal” will soar, accompanied by a rebound in spending.

Businesses will need to ramp up hiring to meet the resurgence in demand. Firms may initially rely on temporary or part-time workers until they can assess the sustainability of new sales levels. As the economy continues to heal, many of these jobs will turn into full-time positions.

Bottom line: In 2020, the ability to contain infection rates determined the course of the economy. In 2021, vaccination rate speeds hold the key to a vigorous and sustainable economic recovery.