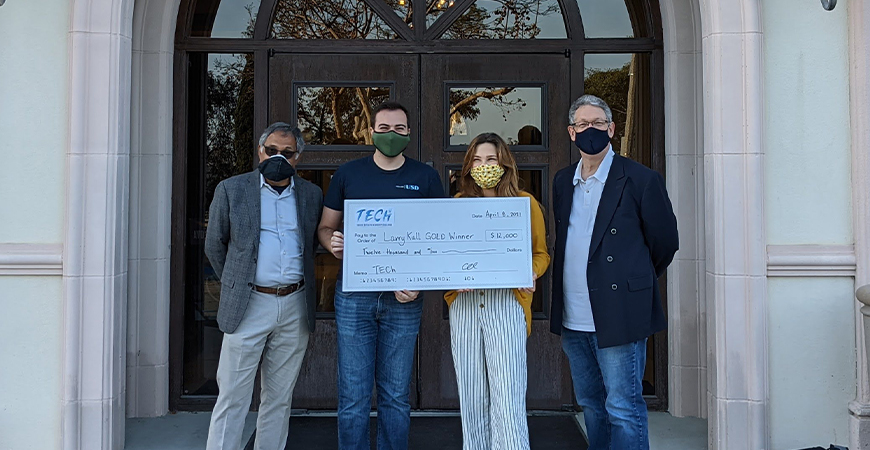 Hosted by the University of San Diego Shiley-Marcos School of Engineering’s Etrack program, the event offered five student teams the opportunity to pitch technology-based business ideas for the chance to win up to $45,000 in seed funding.

A highly interactive virtual event, the evening kicked off with Dean Chell Roberts, PhD, introducing this one-of-a-kind entrepreneurial competition that brought together interdisciplinary student teams from across campus, with startup pitches that had technology at the center of their business ideas. TECh emcee, Professor Jeff Teza, introduced the five teams — Discrete Solar Technologies, SeaMe, Second Wind, Sunlight U and Womenly — who earned their place as finalists at the event from an initial pool of twelve applicants and eight semi-finalists.

Teza shared personal stories about each team and the entrepreneurial mindset each demonstrated. This “persistent curiosity, connection to first-principle science, and creation of value for customers within the structure of an organization,” were all components Teza identified in the innovative ideas being pitched.

As an esteemed panel of judges from industry and from across campus deliberated the outcome of these five finalist awardings, Dean Roberts and Director of Development and Alumni Relations Elisa Lurkis shared stories and video footage honoring the donors behind the two TECh awards — the Larry Kull Endowed Student Award in Engineering and Entrepreneurship and the Starpoint Award.

Former Senior Vice President at SAIC, Randy Vosti, worked directly with friends and former colleagues to honor Larry Kull, former SAIC COO and President, after his passing in a far reaching way. “USD had the right combination. It was a smaller university for an award like this [and] wouldn’t get lost in the shuffle. USD represents the kind of values Larry would have embraced.”

Startpoint Award co-founder and TECh judge Carl Delia was “excited to see the level of invention and innovation by the students.” He also spoke of the spirit of the Starpoint Award as a way to “celebrate the contribution of the entrepreneurial vision of our students and to our society.”

A live People’s Choice Award poll gave the more than 200 guests, participants, families and friends an interactive way to vote for their favorite teams.

In the end, not only did the judges speak, but the people also spoke loud and clear. Discrete Solar Technologies walked away as the grand winner with $12,000 in award money for the Larry Kull Endowed Student Award in Engineering and Entrepreneurship Gold Award and another $2,000 for the People’s Choice Award — totaling $14,000 in seed money.

Discrete Solar co-founders Marley Collins and Sabrina Smith presented their video pitch representing their design team who aims to bring renewable energy sources “anywhere you are brave enough to venture.” In particular, their most likely clientele will be from the alternative lifestyle D-I-Y renewable energy market.

After being awarded the Larry Kull Gold Award, Collins was thrilled with the evening’s results. “Thank you so much for all of the votes and for believing in us. We really appreciate the support.”

Brittany Kirk of Sunshine U, which offers an affordable, accessible online option to drive trauma and mental health innovation, was also awarded $12,000 as the Starpoint Gold Award winner.

“I am still in a bit of shock that I have enough money to take Sunlight U to the finish line and I am elated. I feel like I’ve been working very hard at this for over a year, trying to figure ways to beg, borrow and steal to make it a reality.” Kirk adds, “this funding is going to do tremendous things, and take some of the pressure off and speed up development.”

Etrack co-faculty lead Venkat Shastri, PhD closed out the event with pride and elation. He started the USD engineering entrepreneurship program back in 2016 and reflected on how far the program has come.

“It has been my complete pleasure to work with all of these incredible student teams, our generous donors and our dedicated judges throughout this TECh journey. We have had participation from three different schools across campus, and the market needs that they cover are truly inspiring! This program was just a twinkle in the eye of our Dean five years ago. Thanks to his indulgence, we are here today. And, what’s more, this is just the beginning!”